The questions like what is account receivable? Where is it recorded? Is it a liability or an asset? if these are the questions larking behind in your mind. Don’t worry here we have addressed all these queries in the simplest of the ways. 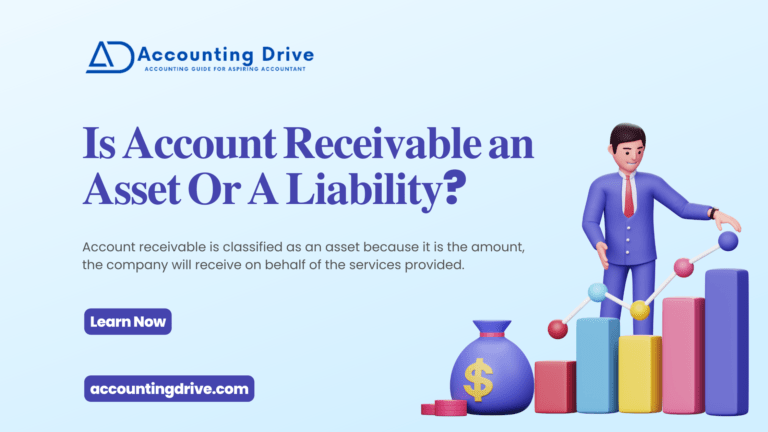 IF IT INTERESTS YOU, DO SHARE IT WITH YOUR FELLOWS.

If you are in search of the answer to the above-mentioned question. Then let me first ask you a simple question. What is an asset? you won’t think twice before answering this question. An asset is anything that a company owns or something that will bring a benefit to the company in the future. So, is an account receivable an asset or a liability? it is classified as an asset because it is the amount that the company will receive on behalf of the services that it has provided. Similarly, the company is going to get benefits in the future. Thus, it is an asset. Moreover, the normal balance of account receivable is debit, and a decrease in it is recorded as a credit.

Why it’s not a liability? it is not a liability because liability is something that a company owes to someone. For instance, when a company purchases something on credit it is recorded as a liability, as the company is now obliged to pay for the received goods. On the other hand, account receivable works contrarily, it is the amount that our client/ customer owes to us. Here, the customer is obliged to pay us. Likewise, the company is going to receive the benefit in the future. So, it has become clear that it is an asset.

Have another example to have a deeper understanding. For Instance, an electricity supply company has supplied you electricity for the whole month. When the month ends, it sends you an invoice/bill. So, the amount in that bill will be recorded as an account receivable in the books of the electric company.

In the process of accounting, everything needs to be recorded to have a proper and accurate functionality of the businesses. Here you will learn how to pass the account receivable journal entry. Firstly, to pass the journal entry we must know the normal balance of the respective account. The normal balance of account receivable is debit while the decrease in it is recorded as a credit.

The entry in this regard would pass as follows.

Considering the above example, the trading company received the full payment in the month of September. Now we will pass another journal entry in this regard. As the company has received the amount, the cash will be debited.  Now what will be credited Is a tricky question. We need to credit something to fulfill the accounting demand of the double-entry system. As the amount has been received. Now, the account receivable account will be credited.

Sometimes it becomes very difficult for companies to recover cash stuck in accounts receivable or get late payments. To outset this, companies make another entry under the bad debt accounts. Bad debts are generated for the amount that is unrecoverable.

Let’s have another example, selling goods to XYZ company on credit worth $25,000 in the month of October.

In the month of November, the XYZ company paid for the goods. Now we will pass another journal entry to complete the process.

It is recorded in the balance sheet under the current assets side. It is recorded just after the goods are delivered and invoices are sent to the customers. Once the invoice is sent, the company will record the respective amount in the account.

As both suggest totally different ideas. Prior is an asset while later is a liability.

Let’s understand it with the help of the infographic.

She is a Business Content writer and Management contributor at 12Manage.com, where she contributes a business article weekly. She has over 2 years of experience in writing about accounting, finance, and business.